Advantages Of Manufacturing In Mexico vs China

Many U.S. companies that are exploring manufacturing or assembly offshore consider both Mexico and Asian options, such as China.

Figure 1 below illustrates a converging trend in manufacturing wage over time between China and Mexico in relation to the United States Dollar. As a result of steady annual increases in Chinese wages and low concentration of skilled workers in Mainland China’s coastal region, Manufacturing in Mexico is increasingly being seen as an alternative to China. Mexico’s predictable, steady wages offer certainty to companies looking to forecast manufacturing costs. Mexico has closed the competitive gap that, until recent years, made China a more attractive locale for some types of manufacturing industry. Mexico is main manufacturing hubs for the industries in recent years.

When establishing manufacturing operations or assembly operations, companies must pay close attention to foreign exchange currency rate trends and forecasts. Slight changes in an exchange rates can expose companies to currency exchange risk. Figure 2 below contains five years of foreign exchange data between the United States Dollar, the Mexican Peso, and the Chinese Yuan. The data shows over the last five years that the ChineseYuan has been held relatively flat in relation to the U.S. Dollar while the Mexican Peso has become 45% cheaper in relation to the U.S. Dollar. This Peso depreciation generally keeps hourly wages in USD relatively level in Mexico. Manufacturing labor costs in mexico is cheaper than china. Labor costs is essentail in manufacturing facilities. labor force in mexico is more than china.

Figure 3 below illustrates the imbalanced trade relationship between the U.S. and China in contrast to Mexico. The current trade imbalance with China is attributed to China’s monetary policy, prohibiting the Yuan to appreciate in trade agreements. Currency manipulation makes the Yuan susceptible to spikes and uncertainty in wage growth as China’s Central Bank relaxes its monetary policy. The sheer size of China’s deficit with the US has caused increasing political pressure to bring it into parity. The trade war relationship between the U.S. and Mexico has been significantly strengthened through the North American Free Trade Agreement (NAFTA), signed in 1994. Figure 3 below shows the trade deficit as of 2018 between the U.S. and Mexico. Unlike China, Mexico allows its currency to “float” or appreciate in world currency markets. This allows wages in Mexico to remain relatively stable and certain. 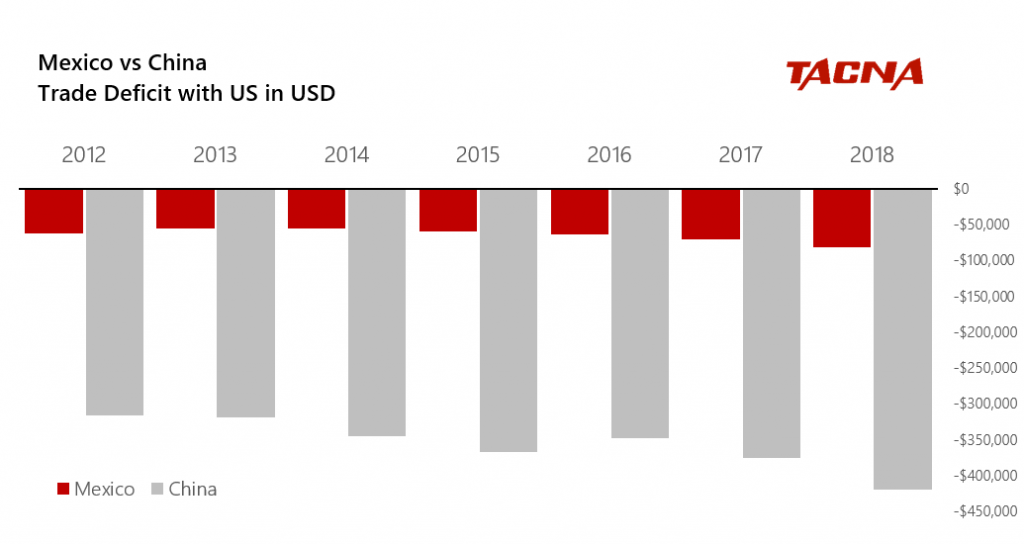 Baja California is the closest Mexican state to Asia with a modern seaport to receive cargo.