Automotive Investment in Mexico On the Rise

For many years, automotive investment in Mexico has remained rather strong. The Latin American country is a strong competitor on a global scale and partners with leading carmakers from all over the world.

As was the case with most industries last year, Mexico’s automotive production took a hit in 2020. But as the world climbs out of the crisis, Mexico is leading the way for sustained growth and innovation in automotive manufacturing. 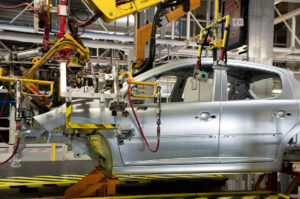 Recently, there have been a string of announcements from leading automotive companies, reaffirming or adding to their automotive investment in Mexico. Uncertainty in the Biden tax proposals has led leading US automakers to strengthen their holdings in Mexico. And this renewed push seems to lean heavily toward the electronic vehicles (EV) sector.

According to the USMCA rules, automotive manufacturers operating in Mexico may export duty free so long as their product is at least 75% made in North America. 90% of the country’s automotive production is exported. Mexico has over 40 free-trade agreements and manufactures for leading automotive OEMs like:

The automotive sector is primarily established in northern Mexican states:

Within the industry, Mexico’s electric vehicle (EV) market is growing. The country is actively involved in manufacturing in the EV sector, both for export and the domestic market – and new investments are being made regularly in this space. At home, Mexico’s government incentivizes hybrid and electric vehicle consumption. The market grew over 43% in 2019, representing more than 25,000 units.

After first pledging to invest $900 million in their Avon Lake, Ohio plant, Ford reversed course in the first quarter of 2021. They recently announced they will instead produce the as-yet-unnamed product line in Mexico.

This renewed commitment to the Mexican automotive industry was met with disapproval among US labor groups, but it comes as no surprise in light of Ford’s heavy involvement in the Latin American country. The US automotive powerhouse is one of the leading sources of FDI in Mexico’s automotive industry.

But the biggest announcement of 2021, so far, is the one General Motors made in late April. The US automotive giant announced plans to invest $1 billion in a Mexican manufacturing complex in Ramos Arizpe. The plant will be tasked with manufacturing batteries and EV parts and components as well as potentially building two Chevrolet electric SUVs. The site will also be home to a new paint shop. This Mexican complex currently employs 5,600 direct employees.

I’m sure this investment will contribute to continue boosting Mexican manufacturing while bringing development to the region, the industry and the country.

In May, the world’s largest car parts supplier, Bosch of Germany, added to the string of announcements of new automotive investment in Mexico. Bosch announced plans to invest up to $100 million in its Mexico operations.

This represents a 15% increase in Bosch’s current Mexico investments. Last year, the German company spent $87 million there, resulting in $2.7 billion in sales from Mexican production. The supplier plans to spend the additional investment on new manufacturing lines and digitization projects at its operations in Toluca, Mexicali, and Hermosillo.

Mexico’s industrial outlook in the near future looks promising. These recent investment announcements only underscore the ongoing growth the country has experienced in the automotive sector. With new FDI pouring in, Mexico will likely continue to grow its share in the global marketplace, producing even greater quantities of quality vehicles for export to the US and around the world.