The Cross-Border Vaccine Mandate Behind the Protests

With trucker protests increasingly in the news, everyone is talking about the cross-border vaccine mandates. But just what are these mandates, and what could their effect be on international trucking and import/export manufacturing? 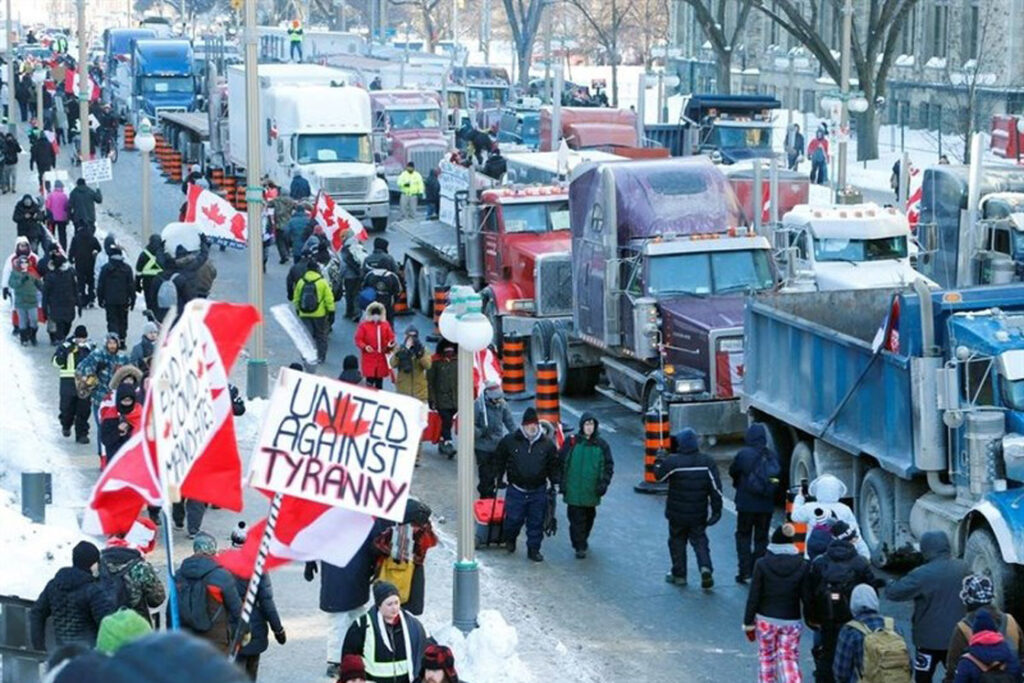 Because each country is different, their vaccine mandates are different. Likewise, the way they handle cross-border trucking varies slightly. However, this poses a problem, because Canada, the US, and Mexico comprise one of the most interconnected economic units in the world.  Even a slight interference in international shipments among the three countries could cause significant disruption and shortages for consumers and the international supply chain.

Let’s take a look at the mandates that have become so controversial and discuss what potential impacts and changes might follow.

In late January of this year, a convoy of Canadian truckers began arriving in the Canadian capital of Ottawa, having started out from Vancouver. This self-labeled “freedom convoy” quickly became the world’s largest convoy in history with over 50,000 trucks and more than 1.5 million people, including many from the United States, congesting the streets of Canada’s capital and demanding an end to the Canadian cross-border vaccine mandate.

This mass protest, which Canadian Prime Minister Justin Trudeau described as a “small fringe minority,” resulted in the prime minister going into hiding as truckers demanded freedom from vaccine mandates imposed by his regime on all truckers entering the country.

While the mandate had originally included all inbound truckers, the mandate was modified in the face of mounting pressure on January 12 – prior to the protests – to only apply to foreign residents. Canadian truckers would be allowed to re-enter the country without proof of vaccination. This came as a result of massive opposition, citing potential for significant disruption in the country’s supply chain as well as increased inflation.

By some estimates, the number of Canadian truckers who refused the Covid vaccines may number as high as 20% of the country’s total driver count. But US truckers will still have to be vaccinated to enter Canada. With around two thirds of the $511 billion USD in US-Canada trade being handled by cross-border truckers, the potential damage is considerable, even if only a fraction of drivers say no to the mandates.

But the Canadian freedom convoy protests have gone viral. There is already a move to organize a similar convoy to Washington DC to protest the US cross-border vaccine mandate. Many US truckers are already parked in Ottawa, Canada. But more could soon be clogging the streets of the US capital, too. The US vaccine mandate strictly bans all cross-border truckers from Mexico and Canada not current on their vaccines.

While there is no testing for Covid for US-bound truckers, there is a vaccine requirement for all foreign drivers. Following an announcement in October, 2021, the US mandate went into effect in January, 2022, requiring:

The way cross-border trucking works in North America, truckers from Mexico and Canada are typically allowed to bring their loads into a border zone with minimal documentation for transfer to US drivers. However, due to the cross-border vaccine mandate in the US, foreign drivers will not be allowed through customs without the above requirements.

Mexico stands out among the three USMCA nations in that there are no universal vaccine mandates, cross-border or otherwise. While Mexico did close the border to all non-essential travel in 2020, the border was re-opened in 2021. And the Latin American country never restricted essential business travel such as trucking.

Mexico’s handling of vaccines in the past two years has demonstrated a far more laissez-faire approach, with individuals deciding for themselves, and no widespread mandates being enacted. In fact, employers must not discriminate against non-vaccinated workers on the basis of their vaccination status. As such, there is no cross-border vaccine mandate on Mexico’s part.

Yet, because of the strict US mandate, many Mexican truckers are no longer allowed to cross the border, resulting in a worsening of the supply chain crisis in the US. Drayage shipping is being impacted, shipping times in particular, as unvaccinated Mexican drivers are being forced to drop their loads at the border and then wait for US drivers to become available to pick them up and carry them across.

While Mexico has no mandates, and Canada and the US ban only unvaccinated foreigners, the effect is that all three countries are basically limited to cross-border trucking by vaccinated drivers only. Because a sizeable portion of drivers are not comfortable receiving these drugs, each cross-border vaccine mandate has measurable consequences for trade with the other North American countries.

With border-crossing shipment times increasing and shortages rising over the past two years, these mandates will likely compound the problem into the future, resulting in spiking prices and long-term supply-chain issues. Companies should take steps to secure their supply chain and trucking processes. Consumers should discuss concerns with their elected officials on national policy measures impacting international trade.