Aerospace manufacturing is without a doubt one of Mexico’s key industries. The Latin American country has been involved in providing assembly and manufacturing services in this market for decades. But recent years have seen a huge rise in production as infrastructure and other critical factors combined for maximum growth potential. 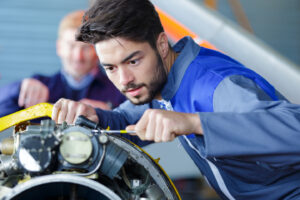 It has been the past decade or two in which Mexico’s aerospace manufacturing growth has accelerated the most. In 2004, the country boasted about 100 aerospace manufacturing operations. But in just 15 years, that number swelled to approximately 360 firms and organizations operating in this sector, according to FEMIA (Mexico’s Aerospace Industry Federation).

Aerospace manufacturing is highly fractured and competitive in Mexico. And thus it is considered the best prospect industry sector. It is a major focus for the country’s economic development efforts and is bolstered by three strong pillars: commercial, private, and military aviation.

Over the past 15 years, Mexican aerospace manufacturing has enjoyed a 14% average annual export growth rate. The country’s skilled but affordable labor force, infrastructure, and strategic location paired with the cost savings of the maquiladora system make it a highly attractive destination for foreign investment funds.  Between the years of 2007 and 2017 alone, the sector achieved accumulated foreign direct investment of over $6 billion USD.  Total exports globally reached $9.5 billion USD in 2019. And in spite of disruptions in 2020, this trend is expected to quickly return to its upward trajectory.

Mexico’s exports make it a favored trading partner with the US. Approximately 80% of aerospace exports go to the United States. But the country is the 14th largest aerospace supplier globally, with trading partners around the globe, including Canada, France, Germany, and others. Mexico is projected to be in the top 10 aerospace exporters by 2026.

Aerospace manufacturing in Mexico is remarkably diverse and extensive. In 2019 alone, aerospace exports from Mexico increased 10%. The country produces the entire value chain and has numerous directions in which to expand. Just a few of the key production areas include:

Commercial aviation has also propelled growth for Mexico’s aerospace operations. This has especially created large demand for maintenance, repair, and overhaul services (MRO). Domestic and international airlines create substantial demand for modernized fleets. And low-cost carriers like Volaris and Interjet are creating even more demand in the commercial aviation space. Likewise, the average age of Mexico’s military fleet is approximately 20 years, so demand is high for MRO services in the public sector.

Because the market is so rich in potential, and so well equipped for success and long-term growth, numerous global leaders are investing in Tier 1, 2, and 3 productions in Mexico. Some of these key players betting on Mexico – particularly in diversified industry clusters along the northern border – include:

There are additional factors promoting ongoing growth in Mexico’s aerospace manufacturing industry. The country’s space program was founded in 2010 to expand the country’s communications satellite network, space science development, etc. In turn, this has opened up numerous opportunities for US space systems and suppliers to manufacture in Mexico.

Mexico has also invested heavily in R&D and supply chains to drive continued improvements and growth in aerospace production. Supplier chains and vendor networks are strong. And virtually every aerospace part and the aircraft itself can be sourced and assembled in Mexico.

The educational environment produces highly skilled manufacturing engineers and assembly laborers at extremely low rates. Mexican workers are adept at performing to US quality standards and requirements. And their productivity rate is high.

The aerospace manufacturing industry in Mexico is truly world class. As the country approaches the top 10 aerospace exporting countries in the world, more and more manufacturers in this space are recognizing the significant growth potential Mexico offers – not only for the industry but for their companies. From turbines to fuselages to upholstery and radar, Mexico will be the home for globally competitive, quality aerospace manufacturing for decades to come.