According to the most recent numbers, Mexico has regained their position as the top US trade partner. Mexico’s economy, while experiencing inflationary challenges, has proved resilient in the post-COVID recovery. Bolstered by a dynamic manufacturing sector, the country’s recent numbers appear positive. 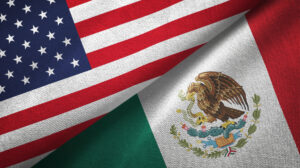 Several key industries and economic activities contribute to this strength on a global scale. And this return to the top spot as trade partner of choice with the United States cements Mexico’s status as an international trade powerhouse.

When new trade data was released for February, 2022, China fell from #1 to #3. But Mexico moved from the #2 position to the top US trade partner – a position it last saw as recently as April of 2021. Canada is now sitting in the #2 spot, just behind Mexico. By the numbers, it’s clear that Mexico’s export-based manufacturing sector is driving their economy, in spite of the difficulties of the previous two years.

According to recent statistics:

In contrast, other leading US trading partners trailed behind. Currently:

Mexico utilizes several key ports and border crossings to exchange many millions of dollars in value each day with the United States. The primary trade portals are:

Mexico trades in many commodities and goods as the top US trade partner. In February, the top exports to the US were:

In turn, Mexico imports from the US primarily:

However, at 89% of total exports, the lion’s share of Mexico’s global trade is driven by manufactured goods. Last year, non-oil exports rose to $31.5 billion USD. Mexico’s top manufacturing sectors bolstering their status as top US trade partner include the following:

Mexico’s recent dethroning of China as the top US trade partner comes as no surprise. Canada and these two countries have been slugging it out for the top position for a few years. But as Mexico’s manufacturing sector continues putting up stellar numbers, registering growth even during times of recession, and continuously focusing on innovation and improvements, trade with the US will likely rise even further.