With historic challenges last year related to COVID, the Mexican industrial outlook remains a mixed bag. While there will continue to be ongoing challenges and the industrial landscape is forever changed, there are positive signs that the Mexican economy is digging out and beginning a successful recovery.

Mexico’s economy is driven by manufacturing and industry, which have undeniably suffered from the COVID crisis. And economic data indicates a rocky road to recovery. Yet there is plenty of optimism and several areas of growth already developing as vaccines roll out in Mexico and consumption for Mexican-made products increases to previous levels. 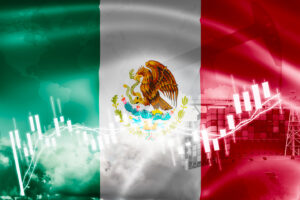 We will explore some of these economic indicators in hopes of providing a rough outlook for the future of industry and manufacturing in Mexico.

Mexico was already in a mild contraction prior to COVID. While it was not sharp enough to cause alarm, Mexico’s economy was nevertheless experiencing a downturn. Several factors contributed to this, including uncertainty surrounding the USMCA, the looming possibility of a trade war, as well as a deceleration of private spending.

However, as was true in most countries, COVID was a proverbial wrench in the spokes of an economy already cooling.  This drastically compounded trends already in progress. Amidst the crisis, annual GDP growth for 2020 ground into the negatives at approximately -9%. In the sharpest contraction since the Great Depression, Mexico’s economy declined 17% in Q2.

Still, there are causes for concern. Mexico’s all-important services sector has lagged behind, and the recovery is somewhat uneven. Unemployment is still high. GDP continued to decline in Q4, albeit at an even softer pace than Q3. Yet manufacturing PMI is now growing at a modest rate, foreign demand is up, fixed investment is up, and there has been a near total recovery in exports.

Due to the rollout of vaccinations and easement of COVID-related business restrictions, 2021 is looking better. Q1 will likely reflect an additionally positive economic outlook for industry and manufacturing. According to Focus Economics Consensus Forecast analysts, 2021 is expected to see GDP growth of 4.3% in 2021.

In Q2 of 2020, approximately 12.5 million people left the Mexican workforce, driving unemployment up to 4.5%. 10.2 million of those workers have since returned to the labor force, but over 2 million have not. And of those who have returned, the majority have joined the informal market. Still others have opted for part-time work. Around half of the country’s workforce remains economically inactive – up from around 40% prior to the crisis.

The Mexican industrial outlook in the energy sector looks particularly bullish. In December of 2020, Mexico’s natural prices hit their highest in 22 months.

It should be noted that Mexican energy prices tend to move in lockstep with US prices due to reliance on pipeline imports from the US and Canada, and US energy prices are looking rather bullish. According to the EIA, spot price for natural gas in the US is projected to average $3.01/MMBtu for 2021. This represents almost a $1 increase over 2020 prices.

Mexico has vast untapped natural gas reserves. This makes energy one of the significant drivers of a potential recovery for Mexican industry. However, the national government will have to revive private bids on oilfields to increase production, which currently penetrates the residential market only 7%.

The Mexican industrial outlook seems promising, but it will require careful policymaking by the federal government. While the current administration has announced no plans for fiscal stimulus, the domestic economy must rebound to sustain continued economic growth. Some are calling for short-term concessions and relief packages to ensure the Mexican economy gets back on its feet. But the 2021 budget calls for austerity, no tax increases, and reliance on a near depleted Budgetary Income Stabilization Fund.

Yet, as oil and gas prices rise, construction activity increases, and industry rebounds, the overall Mexican economic recovery seems likely to continue. Factors driving this positive outlook include normalization of trade relations with the US, as the two neighbors get back to work and renewed demand for made-in-Mexico products rises.

In light of the strong infrastructure and pro-business government in the Latin American country, the Mexican industrial outlook is promising. Mexico remains one of the most popular manufacturing destinations in the world – despite the global crisis of 2020.