When manufacturing jobs shifted to China with the advent of NAFTA, the reason was simple: labor costs. US manufacturers quickly offshored major operations to take advantage of a huge labor pool vastly less expensive than labor in the US.

However, over the past decade or so, things have changed. Mexico, located just south of the border offers an incredibly sophisticated manufacturing dynamo with comparable labor rates. But there’s a major difference. China’s wages are rising more rapidly than Mexico’s. In fact, China has overtaken Mexico’s cost of labor and now exceeded.

The result? US manufacturers are bringing operations back home to the North American continent. But not the US, to Mexico. Nearshoring has replaced offshoring, and it’s no surprise why. In addition to the many advantages the Latin American country offers, labor there is simply more affordable. 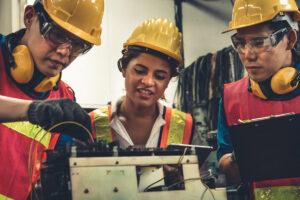 Mexico or the US?

As China’s costs rise, US manufacturers simultaneously face pressure to reshore manufacturing operations to the United States. However, strictly from a cost-analysis perspective, sourcing manufacturing labor in the US is problematic.

Extrapolated across the average work week, this means US firms stand to lose on average around $44,000 per worker each year by sourcing labor in the US. At a ratio of nearly 4 to 1, US labor costs are obviously no match for manufacturing in Mexico.

This steep disparity is further amplified when we consider that labor is often the primary business expense in manufacturing, a very labor-intensive business. For some manufacturers, labor can account for up to 70& of their total expenses. Thus, even a small savings in labor costs can be significantly beneficial for the bottom line.

But there are other savings in Mexico besides wages. Mexico also offers lower healthcare and benefits costs. And while employers often provide lunches or transportation for workers, these additional expenses are substantially offset by the reduction in other benefits and wages. Total compensation packages in Mexico are a fraction of those in the US, where employer-provided healthcare alone recently surpassed a crippling $20,000 per worker.

When NAFTA was signed by the US, Canada, and Mexico, Mexican labor costs were strikingly higher than China’s. Twenty-five years ago, Mexico was nearly three times more expensive than China. And even though China was much farther away and transportation costs and wait times were much higher, the substantial savings in labor costs made manufacturing in China worth it.

However, in the recent decade, that savings has evaporated. The country’s economic policies, currency manipulation, and cultural shifts have resulted in a dramatic increase in wages without a rise in productivity. The result is an exodus out of Asia.

The average manufacturing wage in China is around $6 per hour – considerably higher than wages in Mexico. But it’s not just the current level of wages that make China less attractive to US manufacturers. Over the past decade, the rate at which China’s wages have been increasing is a sharp curve. Meanwhile in Mexico, wages have remained relatively stable, rising very gradually and predictably. Mexico now has the lowest manufacturing wages of the two US trading partners.

But there’s more to this story. Mexican productivity has increased moderately as well. Mexican assembly and manufacturing workers are turning out more product for the time invested than in the past. Likewise, unlike China, Mexico’s manufacturing workforce is highly skilled. Universities and technical programs – especially around industry clusters – continue to churn out highly specialized manufacturing technicians and engineers to match specific industry needs.

Because Mexico offers highly skilled manufacturing labor at costs lower than China and dramatically lower than the US, it comes as no surprise that new business is streaming into Mexico. Major US producers like Ford, Caterpillar, General Motors, and many others are not only attracted by lower wages, but also by the proximity, stronger IP protections, and global free-trade access Mexico offers.

The automotive industry has recently announced huge investments in the Latin American country, but other industries are also relocating or nearshoring to take advantage of the lower labor costs. Leaders in industries like medical devices, electronics, furniture, aerospace, and others are increasing their competitive edge in Mexico without sacrificing quality. And the trend looks likely to continue for many years.